Pokras Lampas, one of the most exciting figures in modern calligraphy, has just finished painting a large-scale piece of art for Stenograffia, a street art festival in Yekaterinburg, Russia.

“One hundred years ago, a black square was painted in Russia that changed the face of global art and design. The challenge was accepted.” Pokras Lampas

Pokras Lampas painted a suprematist cross on Pervoy Pyatiletki Square with a quote from Kazimir Malevich, a Russian avant-garde artist and art theorist, whose pioneering work and writing had a profound influence on the development of non-objective, or abstract art, the founder of abstract art’s suprematist movement in the 20th century.

“I have untied the knots of wisdom and liberated the consciousness of colour. I have overcome the impossible and made gulfs with my breath. We, the suprematists, throw open the way to you.” Kazimir Malevich 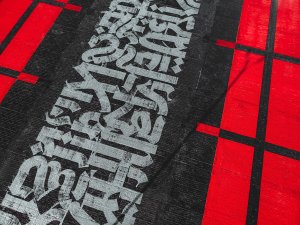 Pokras Lampas created an artwork covering the entire surface of Pervoy Pyatiletki Square in Yekaterinburg’s Uralmash district, an area of some 6,686 square metres. Each of the letters that make up his work is larger than a car! 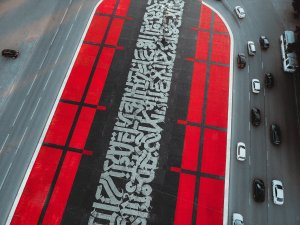 “The main objective of the piece is to get people thinking. It’s a way for me to draw people in and show them that modern art is many different things […] There are a lot of students here who are involved in creative professions, and this is also a very important opportunity for dialogue – it’s important to talk to your generation in a common language.” Pokras Lampas 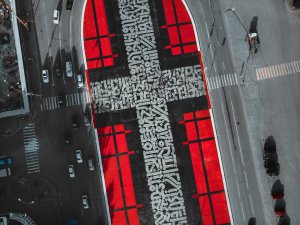 With his piece, Pokras Lampas has transformed an important public space in the city into a focal point for the avant-garde. The slabs that make up Pervoy Pyatiletki Square are laid in the bold pattern of a cross, and it was these sharp lines that inspired the artist to express the aesthetics of early twentieth-century artistic movements in his work. 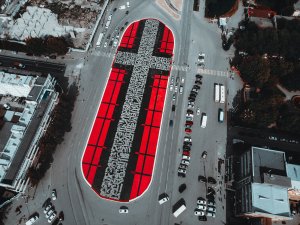 “Suprematism, constructivism, and futurism are all movements that are very close to my heart and an important part of our country’s history. They really fit in here, given the city’s industrial history.” Pokras Lampas 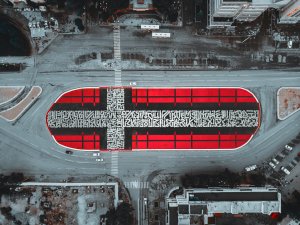 The calligrapher took great care over his preparations for the festival, studying the history of the square and its surrounding district, and set about realising his idea certain that Uralmash would benefit from “a strong, solid piece from the Russian avant-garde”. 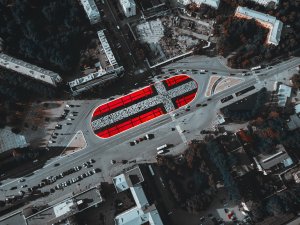 More than 20 volunteers spent four full days working to create the piece. After cleaning the square, they used rollers to paint it red and black. The artist then added silver letters using an enormous brush. 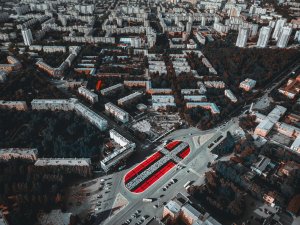 Just as Pokras Lampas uses writing to unite different cultures, the festival’s largest artwork has also brought people from all backgrounds together in pursuit of a single common goal.

“It’s in bringing the past, the present, and the future together that we can create a new culture and rethink the old.” Pokras Lampas 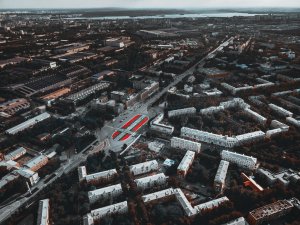 The festival that made this ambitious project a reality is held every year with the support of Yekaterinburg City Administration via the Capital of the Urals municipal institution and Gazprom Neft’s Home Towns social investment programme.